Our Group leaders all have one thing in common - they have all walked the pilgrimage trails and have a desire to share their love of the Camino and Via Francigena with 'wanna-be' pilgrims!  Because we want you to have the best possible experience we emphasise the need for you to walk your pilgrimage your way, at your own pace, no racing to keep up with fast walkers or dragging your heels to keep pace with slower walkers.  The group leaders will always be there to accompany you if you need them but you'll be free to walk with group members or alone. 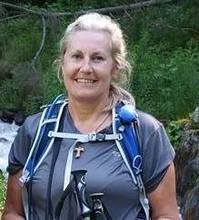 
Dojema Theron is a South African, born and raised in the Little Karoo.  She lived in Namibia for five years and settled in Stellenbosch over 23 years ago.
She is passionate about hiking, nature, animals and travelling.  She has hiked the Inca Trail in Peru and an Amazon Expedition.  In Africa she has done mountain gorilla Trekking in Uganda, hiked the Fish River Canyon in Namibia, the Otter Trail, Whale Trail,  Postberg,  Outeniqua and the  Hoerikwagga trails in South Africa.  She regularly does walks in the mountains and nature reserves of the Western, Southern and Eastern Cape.
In 2008 she discovered the Camino and embarked on her first Camino in 2009 walking the Camino Frances from St Jean Pied de Port to Santiago Compostela.  She was captivated by the unique experience of walking the Camino and knew that she would walk again.  On her return she encouraged others to walk it, assisting them with their planning.
In 2012 she returned to Europe, walking the Camino Portuguese from Lisbon via Fatima to Santiago.  After reaching Santiago she continued on the Camino Ingles from El Ferrol to Santiago and then continued walking to Finisterre and Muxia.  The generosity, goodwill and kindness of people on the Camino motivated her to attend the Hospitaleros Voluntarios course presented by Sylvia in March 2016. She served for two weeks as hospitalero in the Albergue San Anton on the Meseta in June 2016.  A week later she joined Sylvia’s group and walked the Via Francigena to Rome.  She led a group on the Camino Frances in 2017.
She has gained valuable experience organising, co-ordinating and leading groups on hikes, tours and adventure training.  She works in the Wedding and Events industry and is fortunate to have the freedom to plan her work around walking and serving on the Camino.  Dojema is looking forward to sharing the Via Francigena in the Swiss and Italian Alps with you in June.

Swiss ​and Italian Alps, June 2023
​Connie lives in Brampton Ontario with her husband and a temperamental rescue dog from Mexico. She enjoys hosting dinner parties that feature large paellas, curries, or barbecues.
​She first discovered the joy of walking on the Camino Frances from St. Jean to Santiago in 2009, followed by the Caminho Portuguese from Lisbon in 2010, also completing the Camino Ingles and to Finsiterre and Muxia that year.
She thoroughly enjoyed her experience with amaWalkers on the Via Francigena in 2016  through the Alps and Tuscany to Rome as well as the Camino Aragones from Lourdes in 2017, and the Abbot Pfanner Trappist Trail in Kwa Zulu Natal in 2018.
Connie has also completed the Whale Trail in South Africa, the Laugavegur Trail in Iceland, the West Coast Trail on Vancouver Island Canada, the South Coast and Cape Breton in Nova Scotia, and most recently the Lares Trail and Rainbow Mountain in Peru. Mont Blanc is next in line after the VF Alps walk with amaWalkers.
Connie is looking forward to meeting her group in Lausanne. 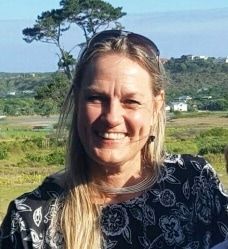 Brigitte first walked the Camino in Sept /Oct 2000.  Upon receiving her first Compostela in Santiago in 2000 she was told that she was the first Namibian to have earned the certificate.
In 2011 she walked the Central Caminho Portuguese; in 2015 the Tunnel Route from Irun to Santo Domingo de Calzada and  the Camino Ingles from A Coruna to Santiago.  In 2016 she did the Coastal Portuguese Camino from Porto to Santiago and included the Spiritual Route from Pontevedra via the coast to Padron.  In South Africa she walked the Otter Trail 1982 and the Whale Trail 1999 and whilst living abroad she spent her weekends walking the Alps to Rocciamelone, Sella and a few others as well as the San Maria Gorge in Crete.
In 2017 Brigitte walked the Via Francigena from Siena to Rome and in 2018 she led and amaWalkers group on the Camino Frances from St Jean to Santiago.  Brigitte did a hospitaleros course with Sylvia and in February and aims to serve in Spain or Portugal.
Brigitte is a retired Swedish Massage Therapist and has a holistic outlook on life.  She has also worked in the fast world of advertising as a Media Planner.  She is looking forward to sharing her passion for the outdoors, hiking and for sharing the Via Francigena with her next group. 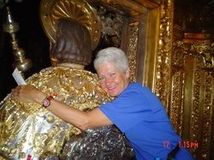 ﻿Sylvia founded amaWalkers Camino in 2010.  She is a peripatetic traveller and self confessed pilgrimage addict who is passionate about the Camino and about encouraging others to walk 'The Way'.
In 2001 she organised a walk across England for 10 people. She organised her first Camino walk in 2002 on a 750km trek from Roncesvalles to Santiago. When she returned, she joined the newly formed Confraternity of St James of South Africa and was the Regional Co-ordinator in her Region for 7 years. She has conducted Practical Pilgrim workshops for new pilgrims and St James Feast Days in July of each year.
In 2004 she walked over 1 120km on the Via Turonensis from Paris to Spain and earned her second Compostela, walking the same year from Sarria to Santiago.  In 2006 she led a group of pilgrims on a 700km walk from Lake Lausanne in Switzerland to Rome on  sections of the Via Francigena pilgrimage trail.
In 2007 she returned to Spain, co-ordinating a walk on the Camino Frances and in 2009 she led a walk from Lourdes in the South of France, crossing the Pyrenees at the Somport Pass onto the Camino Aragones to Pamplona in Navarre.
She has also walked the Camino Ingles to Santiago twice and from Santiago to Finisterre.  She has led amaWalkers groups on the 22-day amaWalkers Camino since 2011 and in 2013 and 2014 she assisted groups of not-so-able people on the last 100 km of the Camino Frances and Camino Ingles to Santiago.
Sylvia is an accredited HOSVOL (Hospitaleros Voluntarios) trainer in South Africa and has trained over 200 new volunteer hospitaleros.  After training in the albergue in Finisterre in 2009 she served for two weeks as hospitalero at the San Roque albergue in Corcubion, and for 2 weeks in the San Anton albergue on the meseta in 2015.
She is the author of a number of Camino books including a pilgrim planning guide “Your Camino", a historical novel "Pilgrim Footprints on the Sands of Time", co-author of "La via Francigena: Five Pilgrims to Rome" : "Camino Lingo - English/Spanish Words and Phrases for Pilgrims on el Camino de Santiago" and 'Slackpacking the Camino Frances' for people who do not want to stay in dormitories or carry their packs every day.
In May 2017 she walked a Slow Camino from Sarria to Santiago in memory of Donna Felisa Medel from Logroño whose 84 year-old daughter Maria offered Felisa's famous sello offering 'Higos, Agua y Amor' (Figs, Water and Love) to passing pilgrims.
Together with Jenny Rooks, she established the Abbot Pfanner Trappist Trail in South Africa in 2017 and in 2018 and 2019 led groups of not-so-fit pilgrims on this new trail. In 2019, she walked from Sarria to Santiago as a pilgrimage of gratitude with her husband, brother and sister-in-law.  In 2022 she walked the Camino Primitivo from Oviedo to Lugo. 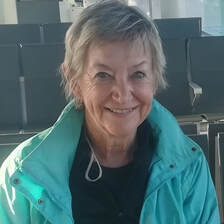 South African born Jenny Rooks is an ardent hiker and walker. She gained valuable experience  taking groups on holidays during her career in public relations. While she was at the University of Natal, she organised and led 3 tours to Madagascar for graduates of the university, as well as an annual bus tour for 44 alumni exploring all the Anglo-Boer War battlefields.

She leads hikes for Ramblers in Durban and for many years helped organises the hiking programme.  She lived in London for almost a decade until 2005 and during that period, she walked all over England, and hiked in Spain and in Sicily.

Her addiction for the Camino began after attending Sylvia’s annual workshops on the Camino in 2010.  She walked her first Camino in 2011 from St Jean Pied de Port to Santiago. In 2012 she attended the Hospitalera course run by Sylvia and served as a Hospitalera at the albergue in Grañon in October 2012 and at Zabaldika (near Pamplona) in 2017.  She and Sylvia have trained almost 200 South African pilgrims, many who have volunteered in Spain and Portugal.

Having followed the journeys of the previous amaWalker groups and hearing about the wonderful service that amaWalkers provides to pilgrims, she joined the amaWalkers group leader team in 2013 and has led many groups on the Camino Frances, Aragones and Via Francigena. As she says, she is ‘totally addicted to the Camino’ and is also passionate about sharing her love of the Camino with all prospective pilgrims, helping them to achieve their goal.  She will be walking the Camino Invierno in 2023.